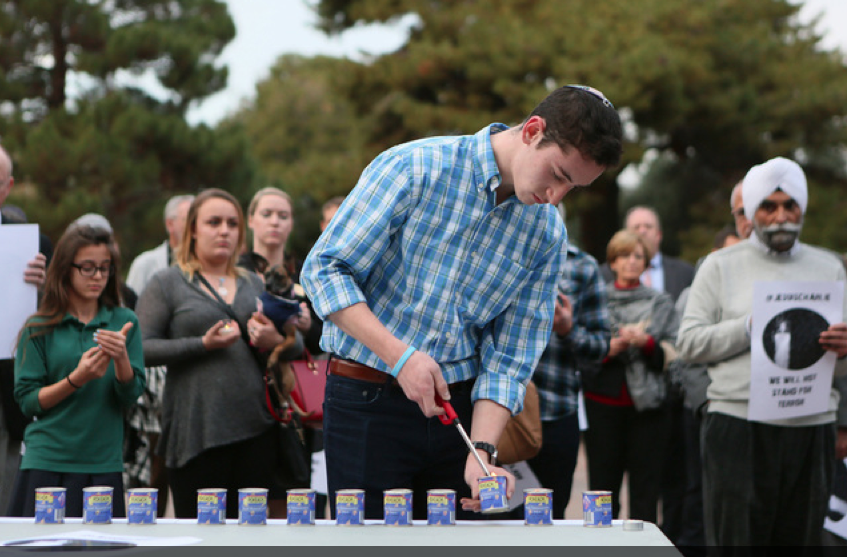 Dozens of people gathered Monday at UNLV for a candlelight memorial for the victims of the terror attacks in Paris.

In response to the recent attack on a kosher market in Paris, UNLV’s Hillel Jewish Student Center, as well as the Jewish Federation of Las Vegas, arranged the vigil as a show of community support.

Long tables in front of the student union were set with small candles, a large poster for sharing messages of peace and individual signs that declared “we do not stand for terror.”

On the poster, the “Je suis Charlie” slogan was joined by “Je suis Juif” — French for “I am Jewish.”

“I think we need to stand together and show a firm stance on terrorism,” University of Maryland student Sam Koralnik said. The 19-year-old College Park, Md., resident lit the 17 memorial candles for the victims in Paris.

Twelve people were killed Wednesday in an attack on the French satirical magazine Charlie Hebdo, known for publishing controversial drawings of the Prophet Muhammad. The following day, a policewoman was killed in a Paris suburb, and four people were killed Friday during a hostage situation at a kosher market.

Koralnik is traveling as part of the Hillel alternative winter break program.

“It’s great to see how a city under siege can bounce back,” he said at the UNLV event.

As the memorial started, Rabbi Tzvi Bronchtain of Chabad at UNLV recited psalms in Hebrew and English. He said that the candles symbolize the victims, whose light went out before their time, and the light the community needs to bring into the world in response to the attacks.

“Let’s hope that our light together, our coming together as a community, will disperse all of the darkness until the day when all the world will get along together as one,” he said.

Elias Benjalloun, UNLV’s student government president, said it is fitting to hold such a gathering at the university because the school’s diversity represents the ideals of democracy and freedom of speech.

UNLV professor Gregory Brown, an expert in French history, said that the area in Paris where the attacks occurred has traditionally been an immigrant neighborhood and serves as a symbol of France’s diversity and freedom.

Muslim and Christian leaders also participated in the vigil, saying that true Islam is a religion of peace.

“We must learn from these events,” The Rev. Bob Stoeckig, vicar general of the Roman Catholic Diocese of Las Vegas said. “When hate exists in the world, we must not allow it to be the only voice.”

As the event began to wind down, Review-Journal Editor Michael Hengel spoke, challenging participants to examine their commitment to free speech.

The type of satire produced by Charlie Hebdo, the magazine attacked in Paris, would be too edgy to run in most college publications.

“When we say ‘I am Charlie,’ we should also ask ourselves whether we have the courage to mean what we say.”