Below is an article from International Business Times by Zoe Mintz 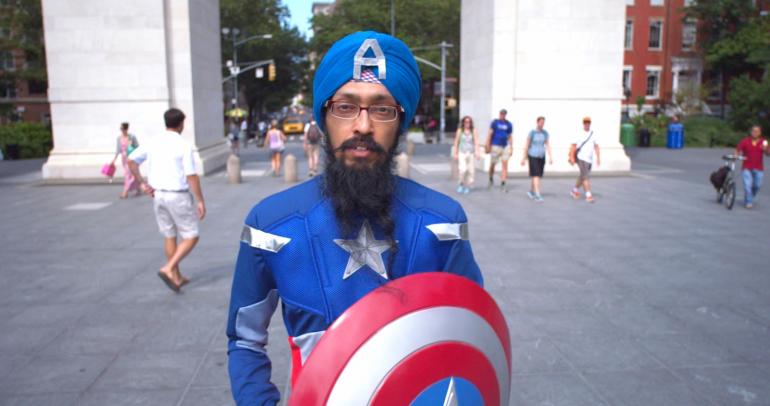 Vishavjit Singh has been getting looks his whole life. As a Sikh, he wears a turban and a full-grown beard, articles of faith that have led to the occasional stares, finger-pointing and Osama Bin Laden catcalls. That’s when he’s in civilian clothes. As Sikh Captain America, things change.

“In costume I get looks, but I get looked at differently,” Singh told International Business Times. The 43-year-old software engineer has been dressing up as the American superhero for nearly two years. His bright blue turban blends into the red, white and blue spandex outfit as he walks the streets of major cities including New York and Los Angeles, college campuses and conferences to promote religious tolerance.

One of these walkabouts, as Singh refers to them, has been documented in the new film “Red, White and Beard.” The documentary short follows Singh as Sikh Captain America in New York City. With a microphone in one hand and shield in another, he asks pedestrians, “What’s the first word that comes to mind when you see me?”

The film, released on Jan. 21, is meant to examine religious intolerance in the United States. Filmed over the course of two and a half days last July, filmmakers captured candid reactions as Singh walked the streets as America’s superhero. For the most part people were quick to comment on Singh’s physique rather than anything pertaining to his faith. Some called him skinny; others questioned where he was born.

“I’m from the U.S.,” he tells a group of teenage boys in the film who guessed he was from India. “I was born here but my parents are from India.”

Matthew Rogers, one of the co-directors for the film, said most of the conversations were lighthearted. Many ended with selfie requests, with everyone striking superhero poses.

“It’s interesting how the superhero figure is respected even with a turban,” Rogers said adding that the only discriminatory comment he knew of took place when Singh was in civilian clothes. “He heard someone call him Osama,” Rogers said.

Racist epithets are nothing new for Singh and Sikhs like him. According to a 2013 study conducted by Stanford University’s Peace Innovation Lab, 70 percent of Americans misidentify turban-wearing Sikhs as Muslim, Hindu, Buddhist or Shinto. Nearly half of Americans said they believed Sikhism was a sect of Islam rather than an independent religion.

“Sometimes I engage with people,” Singh said, “Do you really think I’m Osama Bin Laden? If that’s the case why don’t you call the cops?”

However, Singh wasn’t always so apt to engage in conversation. As a survivor of the 1984 Sikh massacre in India, he knows how ignorant beliefs can escalate to deadly violence.

“The only day I thought I was going to die on was November 1, 1984. I remember huddling with my parents in a circle in our home saying our last prayer,” Singh said, referring to the three-day period where more than 8,000 Sikhs died across the country. During that time, his family hid at home and spent time at a neighbor’s to avoid being attacked.

At one point Singh withdrew from his faith entirely. In college he stopped wearing a turban, long hair and beard. “I wanted to become invisible,” he said . “And it worked. When I cut my hair and walked out, eyes weren’t on me. It was a comforting feeling.”

A month before the 9/11 attacks, Singh decided to return to the faith. “It was out of love, my own connection” to the religion, Singh said.

He began wearing a turban and growing his beard. Two years later, he started Sikhtoons, a political cartoon website. This was where Sikh Captain America was born. Ahead of the 2011 Comic-Con, Singh created what has become his trademark cartoon character, with the caption, “Just relax! It’s called a turban. Inside is my long unshorn waist-length hair. Now let’s kick some intolerant ass.” Soon after, he was convinced to bring his character to life.

“It’s an effort to tell our fellow Americans who we are and what we stand for,” Jasjit Singh, executive director of the Sikh American Legal Defense and Education Fund, told IBTimes about Vishavjit’s work. He added that Singh’s character “humanizes that otherness” that typically characterizes the American Sikh experience.

Sikhism is the fifth-largest organized religion in the world, with 29.5 million members, but just 700,000 live in the U.S. American Sikhs agree that life got harder after the attacks of Sept. 11, 2001. Their turbans — which represent honor, self-respect, courage, spirituality and piety — are confused for ones worn by radical Islamists.

While no exact numbers exist on the Sikh community specifically, the U.S. Department of Justice says more than 800 bias incidents against Sikh, Arab, Muslim and South Asian Americans have been investigated since 9/11.

“9/11 was a game changer for many of us,” Simran Jeet Singh, a senior religion fellow for the Sikh Coalition and a Ph.D. candidate in the Department of Religion at Columbia University, told IBTimes. He remembers how his family decided to stay in their Texas home days following the attacks after they heard Sikhs were becoming hate-crime targets. Afterwards, he knew several American Sikhs who decided to stop wearing their turbans altogether.

While he no longer fears for his personal safety, Simran points to everyday occurrences that leave him feeling like “the other.”

“Every time I walk through airport security I’m pulled aside,” he said. “It signals to everyone that I am someone to be feared because of the way I look.”