A Day Dedicated to Worldwide Peace Initiatives and Activities 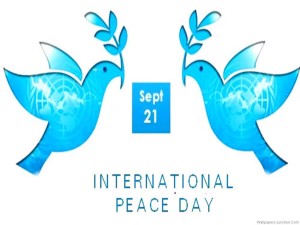 On Monday, September 21, 2015, millions of people around the world will participate in activities, events, concerts and festivals to celebrate the International Day of Peace.

Established by the United Nations General Assembly in 1981, “Peace Day” is an opportunity for individuals, organizations and nations to create practical acts of peace on a shared date.

The United Nations General Assembly, by unanimous vote, adopted Resolution 36/67 establishing the International Day of Peace (IDP) which stated in part, “…to devote a specific time to concentrate the efforts of the United Nations and its Member States, as well as the whole of mankind, to promoting the ideals of peace and to giving positive evidence of their commitment to peace in all viable ways.” The first Peace Day was celebrated in September 1982 on the opening day of the General Assembly.